Let's do what we always do at this time.....speculate wildly.

In the event that you've not watched His Last Vow yet please keep away from this post. You will not be happy at what is revealed herein.


For those of us who have seen the third series we all recognise that we're once again living in the people's republic of Speculationa. We all take up residence between series of Sherlock in an effort to map out what will happen. In that sense we are like the Victorian explorers of Africa who looked at maps of that great continent and imagined what was in the significant blank parts in the middle. We are all Leon Sterndale now (and if you don't get that one - tut tut). 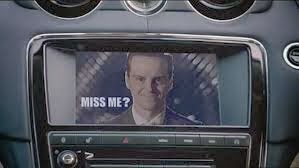 Anyway, back to business. The big reveal of course was the image of Jim "Did you miss me?" Moriarty. Now, I'll put my head on the block here (and lose it no doubt), I don't believe he's back for a second. As much as we like to question Steven Moffat's honesty at times he's told us that Moriarty is staying dead and, on this occasion, I tend to believe him.

There are many other possibilities of course. I remember when we first met Moriarty in series one I speculated that he could really be John Clay and the real Moriarty was behind the scenes. This remains possible if perhaps a trifle unlikely. There were of course other Moriartys (Colonel James Moriarty and the other who was a station master in the west of England).


In various adaptations Moriarty (professor) is called James but this is not so in the canon (i.e. the original stories). The professor is simply Moriarty and it would be weird parents indeed who gave two sons the same name. So could it be that the dead Moriarty is James and the real criminal genius is the other brother. Perhaps we should be checking west of England stations for staff that have not turned up to work?