The subject of Sherlock Holmes’s retirement is one as open to speculation as the great hiatus. In fact, you could argue, they are much the same. They are periods when Holmes’s movements are largely unknown.

Two cases definitely take place post-1903 and they are The Lion’s Mane and His Last Bow. Aside from these, Conan Doyle kept Holmes’s activities under wraps. Holmes suggested that he would devote his twilight years to two things. Bee-keeping (and literature on the subject) along with his own, unromantic, write ups of his cases. 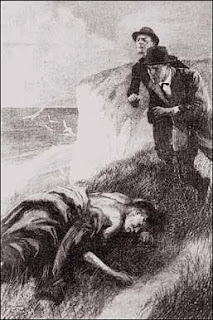 Now we know that Holmes went, as they say, into deep cover in order to build up the character of Altamont who later fooled Von Bork in His Last Bow but this only accounts for two years which were presumably 1912/13 – 1914.

"It has cost me two years, Watson, but they have not been devoid of excitement."

Was the rest of the time purely spent on Bee-keeping?

Well let’s try and figure it out….

Holmes retires at the end of 1903 but when does he actually move to Sussex? He was a tenant in 221B (even though we know he could have bought the property in financial terms) so he could have moved out fairly speedily but he is likely to have given Mrs Hudson decent notice. Some sources suggest that his last case, pre-retirement, was in November of 1903. Bearing this in mind and combining it with a period of notice and time spent seeking a retirement property it is not likely that Holmes arrived in Sussex until the middle of 1904. Did he rent, lease or actually buy his Sussex home? This is something else we don't know. We know that Conan Doyle leased his homes until he built Undershaw in 1897 so perhaps Holmes also finally entered into property ownership.

We do know he is in Sussex by 1907 as that is when the Lion’s Mane adventure takes place. We also know from that tale that Holmes is established and on cordial terms with many local residents which means he has been there for some months (minimum). We also know that by August 1912 he must have commenced his undercover work for the British Government.


We know that during this period Holmes completed his book on Beekeeping as he was able to present a copy to Von Bork (albeit unexpected by Von Bork). It would seem doubtful that he was working on it and liaising with a publisher whilst undercover so we can perhaps assume that it was complete prior to 1912. We certainly know that the bees were already a fixture of Holmes’s home by the time of the events of the Lion’s Mane so research and writing up was probably taking place not long after he arrived in Sussex. It all depends on the question how long does it take to establish a working hive?.

Let's open it to the floor. What else do you think he could have been doing?