A great film with Doylean and Sherlockian links.

When it comes to certain stories or films, my taste can be seen as more than a little soppy/romantic in the sense that I do like romances set against a backdrop of turbulent times. One of my favourite films is the 1950s version of The Prisoner of Zenda starring Stewart Granger and Deborah Kerr. That film was based on the book of the same name by Anthony Hope – a friend of Arthur Conan Doyle who visited him at Undershaw.


Yesterday I got round to re-watching The Life and Death of Colonel Blimp which was made in 1943. For the Sherlockian it is worth watching. In its early part it covers the 2nd Boer War, a period of history in which Conan Doyle took active part by working in a field hospital. As students of Doyle will know, he encountered much anti-British opinion and propaganda and his answer to this was to produce his “pamphlet” The War in South Africa its Cause and Conduct. This book told the story of the conflict from the British perspective and went some way to arresting (if not altogether reversing) the anti-British feeling that was sweeping across Europe at the time. It was this same work that ultimately led to Conan Doyle’s knighthood.

The main character of the film is Clive Wynne-Candy whose adventures borrow (unintentionally I think) from Conan Doyle’s own life. In the film Candy claims to have talked with Conan Doyle about the anti-British propaganda (particularly how it was being received in Germany) and how he wants to personally head to Germany to answer back for Britain. He is barred from doing this by the War Office but goes and does it anyway. So the character of Candy can be seen to embody a little of Conan Doyle who went to South Africa despite being rejected by the British Army. Candy eventually ends up insulting the whole German Army and has to fight a duel which, bizarrely, leads to him forming a lifelong friendship with his German opponent. 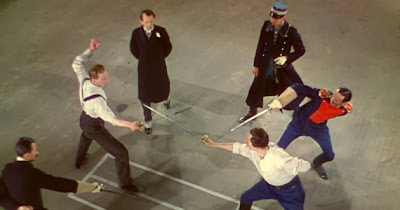 The Hound of the Baskervilles is also referred to as it was being serialized at the time of the film's events and the way Candy, in the middle of his dressing down, is quizzed about the story by the War Office is quite comical.

The connections do not end there though. The principal figure at the British Embassy in Germany (who ends up overseeing the duel) is played by the great Arthur Wontner who played Sherlock Holmes in five films during the early 1930s. Major Plumley of the War office is played (in an uncredited part) by Ian Fleming who played Watson opposite Wontner in four of those five films.

If you've never seen it try and give it a go.