Sherlock at the BFI aka Morangate

Well it would appear that Caitlin Moran messed up rather astoundingly at the BFI screening of The Empty Hearse.

Now I've read reports of what she did (and will not be going into it here) and it was clearly stupid and possible to see as being a mistake long in advance - if she is surprised at the reaction then she certainly had a serious lapse in judgement. At the time of writing she does not seem to have addressed any of the many and varied complaints on Twitter about her hosting skills.

I suppose my biggest problem with her actions is that they have cast a shadow over an event that was very important to those attending it and a source of extreme envy to those of us who didn't. 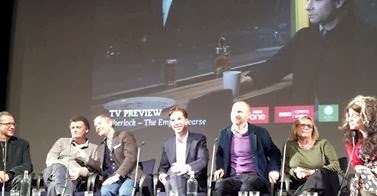 People on the internet had to talk about something and, in the absence (so far) of spoilers, Morangate dominated instead. This takes the spotlight off a series loved, and waited very patiently for, by millions. I think people were also surprised given that Moran had apparently done well with the Q&A for series 2.

There were reports on the internet of Moran being given the hair-dryer treatment by BBC bigwigs. If true, this will represent some kind of deserved rebuke. I doubt she'll be helming the Q&A for series 4. Will she get any more Sherlock related interviews.....?

Aside from these events, all reports agree (or do so far) that the series has come back with a bang and we will not be disappointed.