For Sherlockians of a certain age, Douglas Wilmer is the number one Holmes. Wilmer appeared as Holmes for the BBC in a series of adaptations which began with The Speckled Band. Following this initial series he quit the role citing concerns about production standards and the role passed to Peter Cushing. 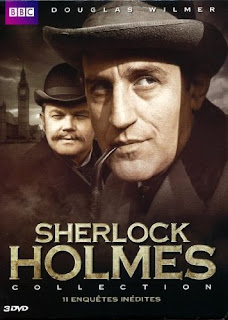 Although Cushing’s outings as Holmes have been available for some time it has been hard for residents to see Wilmer’s turn as the great detective. The BBC, in its wisdom, has released Wilmer’s episodes in mainland Europe and the but has decided that the does not need to see them.

Fortunately a simple order to Amazon.fr helped get me around this issue.

So, to begin with, how easy is the French DVD to navigate? Speaking as someone with only extremely basic French I can say that it is not a problem. The main episode menu lists the titles in French and English and you can use your own DVD player’s settings to turn off the French subtitles (which are naturally enabled by default).

Now let’s move on to the actual programmes themselves.

The episodes really are of their time. The sets are often quite basic (and wobbly a la Blake’s Seven) and this renders some things a little less than believable. For example, in The Copper Beeches the man who spies on Violet Hunter, believing her to be the daughter of villain Rucastle, appears to be so close to the window of the room in which Miss Hunter sits that he could not fail to see that his fiancée is being impersonated.

When clients leave , the time between them being shown out and the front door slamming is so quick that it is unbelievable that the sitting room is on the first floor as it should be.

Finally, the truly awful incidental music that is present in some scenes is a lot to stomach.

Turning to the positives, the sets, low-maintenance as they are, are pretty close to the Paget drawings and the stories are very firmly set in the Victorian era. The one exception to this that I noted appeared in The Devil’s Foot where some modern safety barriers at the top of the Cornish cliffs were as anachronistic as an aeroplane or television aerial would have been. Perhaps this is indicative of the production standards that allegedly so concerned Wilmer.

The costumes are excellent and you can quite easily see that they have been modelled closely on the Paget illustrations. Finally, the stories are faithfully told with only relatively minor tweaks here and there – a bit of dialogue removed or added as appropriate.

For me, as a child of the Brett era, Wilmer falls short physically as Holmes. He is a little too stocky for my liking – not the tall and lean man of the books. Nigel Stock as Watson does his best to be faithful to the character but leans towards the Nigel Bruce mold a little too often. Both men are a little too old for their roles but that is hardly unusual as the two characters are often played by men at least ten years older than they should be.

Quibbles aside, this is a good set of faithfully told adaptations. The quibbles, like scratches on a lens, can be focused through and you should have a good time watching these episodes. It only remains to convince the BBC that they should make the set available here and thus eliminate the need to import it.