Last night I finished reading Ely Liebow's biography of Dr Joseph Bell who is pretty much universally accepted as the model for Sherlock Holmes.

Liebow paints a picture not only of the life of Bell but also of the evolution of medicine in 19th century Britain. He refuses to focus purely on Bell and allows himself to take the odd, but short, tangent into events of the time. Far from being distractions these help to give you a much better idea of the times in which Bell was living. 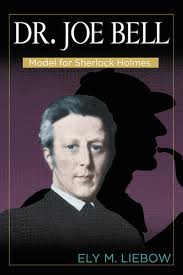 Personally I was very surprised to discover how religious Bell was. In television portrayals he often comes across as agnostic bordering on atheist - trusting science not religion. Yet it turns out he was very religious and turned to his faith for comfort when he suffered personal tragedies which included the early deaths of his wife and, later, his son.

Throughout the book we are also introduced to other significant people from the world of medicine. Bell's fellow police consultant Dr Littlejohn; Patrick Heron Watson - the famous surgeon and likely inspiration for Dr John Watson and Baron Lister - one of the pioneers of sterilization.

Bell comes across, quite rightly, as forward thinking for his time. He was of material assistance to Florence Nightingale in her efforts to improve the standards of nursing and nurses themselves and he helped in the cause of women becoming doctors although he did appear to have the occasional attitude that was all too indicative of his time.


One of the most interesting sections is to be found at the very end where we learn about Adrian Conan Doyle's efforts to deny Bell's role in inspiring Sherlock Holmes. His attempts to do so, often by threatening legal action against Conan Doyle biographers, come across as positively feeble yet his persistence in trying to deny Bell his place in literary history is nothing short of amazing (if also irritating).

For anyone wanting to understand the origins of Holmes and of Conan Doyle's great mentor this is a must-read. It can be hard going in parts but if you stick with it you will come away with a much greater understanding the influence Dr Joe Bell had on Britain's greatest literary character.