I was recently sent the first five comics in The Dark Detective series by series artist Phil Cornell. Readers of this blog with good memories will recall that Phil provided the cover illustration for my book Close to Holmes and has furnished me with a suitable hound for the cover of my next book (due in December).

I have to say that I have read all five issues and they are excellent. Of course comic versions of Holmes are not new and only recently we have had comic book versions of the first three of Conan Doyle's Holmes novels. 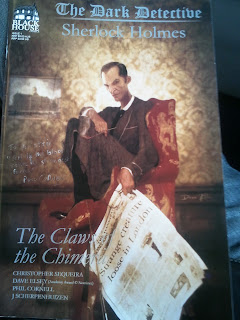 These new comics (which are not from the authors of the aforementioned books) are in a similar style but present us with original stories and, as the name implies, a much darker and unstable Holmes. To my mind they can be described as Holmes meets Hammer Horror.

Issues 1,2,3 and 5 concern a running story involving Holmes's encounters with a secret society. These same issues contain a parallel story with Moriarty. I say parallel because at this stage the two great opponents are yet to really tread on each other toes. Issue 4 takes us to one side to delve into the world of Mycroft Holmes as he introduces us to a number of stories from his government archive. This issue in particular reminded me of those Hammer style shows where Vincent Price or Peter Cushing appeared as some kind of patrician story teller who introduced a number of horror tales - all of which had some kind of moral message.

An interesting aspect to the tales is how often Watson is treated badly by Holmes and how much this, and Watson's tendency to shrug the insults off, annoys Watson's wife Mary. I found his both amusing and realistic as Conan Doyle always painted Mary Watson as rather too indulgent of her husband's tendency to rush off with Holmes at a moments notice.

I heartily recommend this series and am very much looking forward to those that follow. However I'm not sure about Moriarty with a beard.