I finished reading this book last night and I have to say I was rather impressed. The book begins with a look at Arthur Conan Doyle’s life (albeit at a relatively high-level) before moving on to look at the silver screen’s attempts to bring his work to the masses. 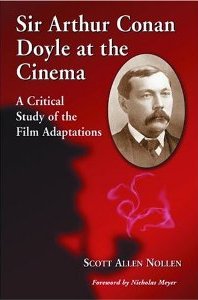 It is important to stress that this book does not just look at Sherlock Holmes (although the majority is Holmes). The book also looks at attempts to dramatise The Lost World and Brigadier Gerard.

The author is not afraid to say what he thinks and he roundly criticises some attempts to adapt Conan Doyle’s work. However he also hands out praise where it is due. In this the book is very even-handed. The author is also not afraid to tackle the light-hearted efforts such as Young Sherlock Holmes or Without a Clue.

The author’s particular likes and dislikes are plainly evident. It is clear that he has great affection for Basil Rathbone and considerably less for aspects of performances by those that followed him. Certain aspects of Jeremy Brett and Peter Cushing’s outings as Holmes come in for consistent criticism.

However it needs to be born in mind that this book looks at cinema not television. There are some references to Holmes on the small screen but there is no in-depth analysis of Brett’s turn as Holmes or, for that matter, the efforts of Ronald Howard or Douglas Wilmer. The most these actors get are the odd paragraph and then only when it serves to make a point in relation to a big screen outing.

The biggest downside is the book’s age. As a result it contains nothing after Without a Clue. Therefore as a guide to Conan Doyle at the cinema it is out of date. I feel it would have benefitted from looking at television as well but it does what it does very well.