A Study in domesticity

In the Canon Arthur Conan Doyle gave us very little insight into the domestic lives of Holmes or Watson. This was apparently based on a desire to avoid what he saw as irrelevance.

A Study in Scarlet contained a fair amount of domestic information but this was mainly designed to help us understand, through Watson's eyes, the kind of man he had chosen to share rooms with. Once that was done, the domestic aspects to the stories really tailed off. When Watson marries we get very little insight into his home life with Mary. Apart from a token amount in The Man with the Twisted Lip (which is necessary for the introduction to the story) we see virtually nothing of his life outside of his investigations with Holmes.

Well, Doyle was writing short stories and there simply wasn't the space to focus on such things. Most of the stories fall into the 7000 to 10,000 word range (aside from the novels). By necessity he had to focus only on narrative that was relevant to the plot. He probably also calculated that his readers were more interested in the crimes that were being investigated and solved than the lives of his two heroes outside of such things.

In this he was presumably correct as I'm certainly not aware of people at the time demanding to know more about Watson's home life etc. 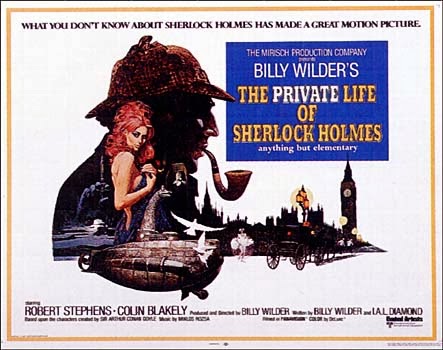 How different this is from today. Now an enormous amount of energy seems to be devoted to speculating about or dramatising the domestic life of Holmes and Watson. From the film The Private Life of Sherlock Holmes through to Sherlock we are seeing more and more of the characters' lives away from crime.

In an age where we seem increasingly obsessed with poking into anyone's private life this makes sense. We appear to crave a more holistic view of people - be they fictional or not and regardless of whether or not we really have any need (or right) to know.

I suppose this is actually Doyle's fault. If he had painted an unambiguous picture of the lives of Holmes and Watson away from crime there would be little room for speculation. This begs the question - would screen adaptations of the stories have benefited or suffered from this lack of ambiguity?