The Affairs of Sherlock Holmes • by Sax Rohmer

A new Sherlock Holmes pastiche is out now.

I stress that I've not read it (so this is not a review). 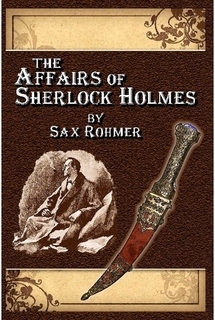 The "blurb" is as follows:

In the 1800s, a number of Victorian and Edwardian writers began writing detective mystery stories — for this was the era when Arthur Conan Doyle was creating Sherlock Holmes tales on a regular basis. Modern authors have attempted to recapture the mystique of Conan Doyle’s adventures by writing “new” Holmes stories; yet these attempts frequently fail to capture the original flavor, because 2013 writers simply don’t think or speak like Victorians. Conan Doyle’s contemporaries wrote about characters of their own invention; nevertheless they sound more like Conan Doyle than do any of his deliberate modern imitators. One of the more successful of these “period” writers was Sax Rohmer. Now in 2012, both Sax Rohmer’s stories and the Conan Doyle canon are all in the public domain. Thus it is now possible to present ... Sax Rohmer’s version of Sherlock Holmes.


Link to purchase is here.