Ever since the BBC’s Sherlock series began in 2010 there has been a debate concerning whether it or the Warner Bros film of 2009 is the better adaptation.

Neither offering scores 100% when it comes to being faithful to the source material. BBCS does the best however as its principal failing is only that it is set in the incorrect time period. The creators have justified this on the grounds that Conan Doyle wrote Holmes as a contemporary character and that they are, in effect, doing the same.

It’s very easy for those of us reading the stories today to forget that Holmes was not a historical detective to the people that read his adventures when they were first published. However as time went on Holmes did become increasingly a prisoner of the nineteenth century.

When Conan Doyle penned his first adventure A Study in Scarlet in 1886 (published in 1887) Holmes was operating in the same Victorian period as those who read the story. When Conan Doyle wrote his last Holmes adventure Shoscombe Old Place (published in 1927) Holmes was still the Victorian (perhaps just about Edwardian) detective even though the reigning monarch of the day was King George V (Victoria’s grandson). In other words Holmes had made the transition from contemporary to semi-historical and was now operating in a world that was some two decades in the past. Although this was no doubt largely influenced by the character’s age (known to be sixty in 1914) it does suggest that Conan Doyle saw the Victorian era as Holmes’s natural place. This is born out by his opinion of the Eilee Norwood silent Holmes films which he thought were fine aside from the fact that they were set in the 1920s. Looked at in this way the argument for moving Holmes to the present day is a little weakened. See here for further details.

WBS scores highly by keeping Holmes in his correct historical setting but elsewhere its record is not so good. Their Holmes is not the Holmes of the books. He is, if anything, a diluted Holmes (or Holmes Lite). Where Conan Doyle gave us a Holmes who epitomised the Victorian gentleman and who was brain first, brawn second. WBS has given us a Holmes who demonstrates considerably less brain work and is more of a brawler with personal hygiene issues. The WBS film also seems to confuse eccentricity with madness. The Holmes of this film shares the occasional appearance of being present in body but not in mind with the character of Captain Jack Sparrow from the Pirates of the Caribbean films.

Watson in both BBCS and WBS is faithfully depicted. Conan Doyle gave us an intelligent and brave former army doctor and this is what we are given by both adaptations. It is rather pleasing to see Watson so well depicted after so many poor screen outings (such as Nigel Bruce). Perhaps WBS felt that if Watson could not be the comic relief then Holmes had to step in instead.

Inspector Lestrade is also well served by both adaptations. In the books he is very much depicted as a man lacking in reasoning ability but gifted with energy. In both WBS and BBCS this is the kind of man we are presented with.

So, as said above, from a fidelity standpoint, I feel that BBCS scores over WBS in almost every area except that of chronological setting where it loses and the depictions of Watson and Lestrade where they tie.

Both WBS and BBCS have raised the profile of Holmes and have unquestionably increased his fan base. However these are screen fans rather than book fans. It is debatable how many of these new fans will go on to embrace the original Holmes.

Of course a proportion almost certainly will. I personally discovered Holmes and became a fan through the films of Basil Rathbone so the transition from a less than faithful screen Holmes to the original literary Holmes is clearly possible. Large numbers, however, are destined to remain fans only of the adaptations themselves.

Many fans of WBS who pick up the books are almost certainly going to be disappointed at the lack of love interest, the relative lack of fights and the almost total absence of explosions that the film leads you to believe form most of Holmes’s day-to-day existence.

Similarly, many fans of BBCS are going to be shocked that the stories have leapt back a century and that the text messages and cars have been replaced with telegrams and hansom cabs. BBC Books are not helping in this regard. They are in the process of re-releasing the original Holmes adventures. The problem is that the covers feature the modern Holmes and Watson and will create the impression for some that the stories are also modern. Some people will not react well to the Victorian Holmes they are faced with in the pages that follow the 21st Century Holmes on the cover. I strongly suspect that a sizeable majority will elect to stick with the version they enjoy and Conan Doyle’s original works will remain unexplored.

Both adaptations can, in my opinion, be regarded as successes even if they only bring a handful of new people to the books who then learn to love the written Holmes as much as the screen Holmes.

So the adaptation, in my opinion, which does the most for Holmes's profile is BBCS but the race is a close one and not the forgone conclusion that many might have expected. 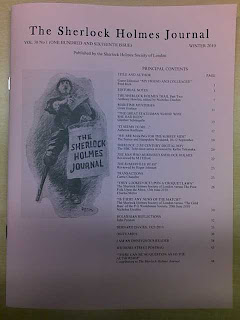