The Case Notes of Sherlock Holmes - A review

I bought this book last Saturday and I am now starting to ask myself why. I am also trying to answer the question what market is this aimed at? 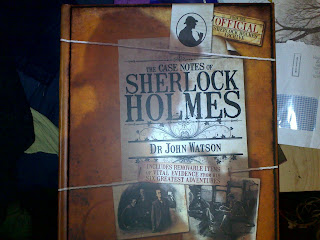 The "book" is put together in such a way that it reminds you of those magazines that, over time, 'built into a wonderful collection...' For your money you get "notes" on some selected stories and some items that are made out to be replicas of 'Vital Evidence' from Holmes's cases. Examples include a copy of The Baskerville Legend, a picture of Irene Adler and a copy of one of Watson's letters to Holmes.

The cover (as can be seen in the above picture) suggests that it covers Holmes's six 'greatest' adventures. This is patently an absurd statement. One of the cases featured is 'The Dancing Men' which cannot, by any measure, be referred to as one of Holmes's greatest since it included the death of his client. The inclusion of cases such as 'The Final Problem' and 'The Hound of the Baskervilles' have more merit.

I am forced to conclude that the choice of cases had more to do with what replica 'evidence' could be included in the package. Suggesting that the aformentioned 'Dancing Men' was one of Holmes's greatest cases allowed the 'author' to include replicas of the stick man messages.  We also get a footprint map from 'The Boscombe Valley Mystery' that shows us how Holmes identified who did what from the various footprints at the scene. This, in my opinion, is not one of Holmes's greatest adventures either.

I now come back to my earlier question. Who is this marketed at? The answer can only be that it is marketed at those people who know very little about Holmes and are seeking an easily accessible way into his world. It is certainly not aimed at an expert or indeed anyone with a semi-decent understanding of the subject.

As a final note. The 'evidence' items are well produced and the whole package is handsomely put together. However you should not let the nice packaging distract you from the fact that you are most definitely not getting details on Holmes's six 'greatest' cases and you will learn nothing from this that you could not learn by buying the stories and reading them for yourself. Doing so, incidentally, is something you could do for less money than it costs to buy this item.