I have been lucky enough to be sent an early copy of Mike Foy's second book of Sherlockian illustrations. It has been a real eye-opener for me as it has exposed me to artists whose work I had seen (and some I had not) but didn't really appreciate.


This book is best described as post-Paget. It is covering artists both UK and international that were working on Holmes at the same time as Sidney Paget or after as a direct result of his death.
The one that amused me the most was Richard Gutshmidt who worked for German publications and seems to have spent a lot of his time simply copying the Paget illustrations. Page after page show Paget's originals alongside Gutshmidt's copies. How he was not sued is anyone's guess. 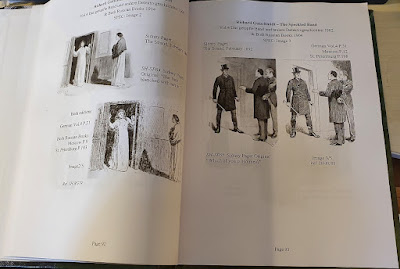 That said, he did produce original illustrations when the occasion called for it i.e. when he needed something that Paget had not produced. The style of the pictures in those cases being, in my opinion, discernably different. 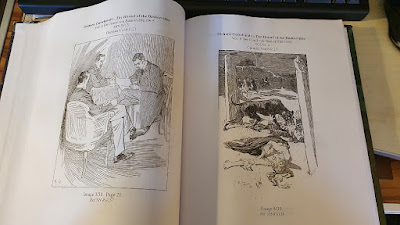 We then move to the US and the illustrator Graham Grinham whose style of drawings looks like he would have been perfect to illustrate Jeeves and Wooster... 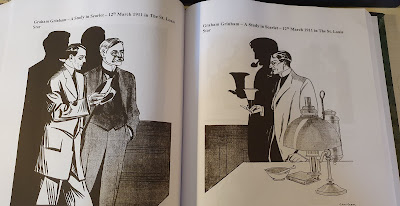 ...something he shared in common with Raymond Pallier in France whose style was even more so. 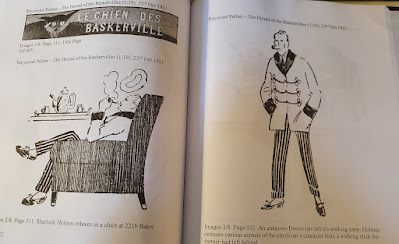 A dramatic change in style can be seen in the work of Thomas Nicholl whose illustrations bear a passing resemblance to those of Charles Doyle. Mixed in with all the international illustrators are Paget's successors in the UK such as Arthur Twiddle whose work I much admire.
Many of the observations I made about volume one carry over to this book. The size means this is a not a book you can carry around but it does have the advantage that it brings together the work of illustrators that I have not seen gathered together in any other tome. If your only exposure to illustrations has been Paget and/or Steele, this book will give you a great insight into the image of Holmes around the world and how it differs (or doesn't) from those more readily well-known artists.
Because of the artists covered, I would say that this is a superior book to volume one in so far as it is offering the purchaser something they cannot easily get in another tome.