The full title of this book is Hounded! My Lifelong Obsession with Sherlock Holmes and the Hound of the Baskervilles. Quite a mouthful. So let's go.


The book, as Stadon states early on, is a chronicle of his fascination with, arguably, Conan Doyle's most famous story. Stadon makes it his mission to experience every version of the story in every possible format - film, TV, audio, cartoon, documentary.... 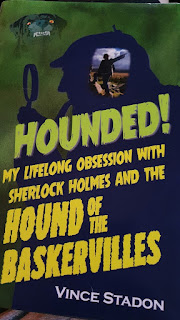 You get the idea. The book is the result of this Baskerville binge.
Stadon, to his credit, sets out to be inclusive. By this I mean he has not targeted this book at Sherlockians alone. He aims for the book to be accessible to all but you are left wondering how many non-Sherlockians are really going to give it a go (or even perhaps hear about it.)
The book opens with a pocket biography of Conan Doyle. This has a few misses especially when talking about the genesis of the story. Stadon states that it is not clear why Bertram Fletcher Robinson did not co-write it. Yet, later in the book, he gives a pretty good account of the origins of the story that removes most questions. The description of Robinson being pushed aside is not fair. Robinson withdrew voluntarily (at least that is generally accepted) as soon as Holmes became the lead character. He described himself as the "assistant plot producer" and remained friends with Conan Doyle until his (Robinson's) death.
It is entirely fair to say that the book is an eclectic mix. I think it would also be fair to say that this book comes across more as a collection of related essays, some of which could have been omitted and others presented in a different way. The account of Stadon's wife attempting to summarise the plot seems unnecessary and I'm not sure who it is targeted at. As a Sherlockian I skimmed through it quickly and for a non-Sherlockian it's not going to offer them much unless they too struggled with the plot and wanted reassurance that they're not alone. The problem with this whole piece is that anyone who watched a film adaptation and struggled to get it is not likely to have bought the book. It's as if Stadon is writing for an audience that's never going to know that his book exists.
The basic approach of the book is that Stadon alternates between commentating on the original story, consuming some kind of adaptation, and giving us some autobiographical information (or anecdote) before repeating. This constant change is jarring. It's as if you're watching a good film on ITV and just as you're getting into it there's yet another ad break to spoil your focus.
I know I sound down on this book but that's only because I think it is a good idea that Stadon could have presented differently. I think he should have decided to target it at either non-Sherlockians or, preferably, Sherlockians. By attempting to reach both he has produced a book that contains too much material that probably won't grab Sherlockians and a lot that will put off non-Sherlockians. 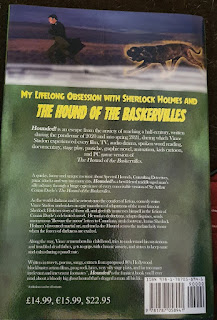 There are some moments where I felt kinship with Stadon; his clear love for the Granada Holmes (at least the first two series) being one. Another being his dislike for the Peter Cook and Dudley Moore version of the story. I also admit to learning some facts that had eluded me before now.
There are some genuinely good parts in this book but they are sharing space with parts that don't seem to belong. This is less a book about the Hound and more a book about what a man did with his lockdown time - even if a lot of that time was devoted to the spectral canine.
Ultimately though, what spoiled the book for me was the constant jumping around. I suspect anyone of a Sherlockian frame of mind is not going to be especially engaged by Stadon's transcripts of his Twitter conversations or his thoughts on topics other than the Hound. I strongly doubt that non-Sherlockians are likely to discover this book in the first place. If you're not into Holmes you're unlikely to wake up one morning and want to seek out a book on this subject.
My recommendation to Stadon is to bite the bullet and lose the non-Sherlockian parts of this book in a second edition (if one is ever produced.) I'm interested in what you think of the Hound. Do a thorough analysis of the story and its adaptations, lose Daniel Craig et al. (yes, really), drop the domestic stories and Twitter transcripts, and you could produce a book that stays in people's collections for a long time.
Please do it.
I was given a copy of this book for the purposes of review.