I was sent a free copy of this book for the purposes of review. It was also not the final draft so changes may appear when the book is officially published.


This is not the first book by Mike Foy that has crossed my desk. Back in January I reviewed his excellent reference tome on Holmesian characters (see here.) So when I learned he had a new tome looking at Sherlockian illustrations, I was naturally eager to see what he had come up with. Fortunately, when you share a publisher, you can get advance copies with a minimal amount of begging.

The book has the same dimensions as Foy's earlier tome so it's a large one. You won't be carrying this one around with you.
This book is intended to be the first of several volumes. The remit of this first volume is to look at the initial illustrators of the stories. To that end, it covers the work of Charles Doyle, David Friston, James Greig, Walter Paget, and, of course, Sidney Paget - as well as some illustrations whose artists are unknown.
The format is simple. Each artist is introduced via a short bio' and then their illustrations are presented with simple annotation. Said annotation will usually be the artist's name, the title of the story in which the illustration appeared, the publication in which it appeared and even details such as the page on which the image was presented.
update: You should look upon this book as an illustration catalogue. It is not going into depth about the images or their creators.
With a few exceptions, the images are one per page, hence the book is a long one. 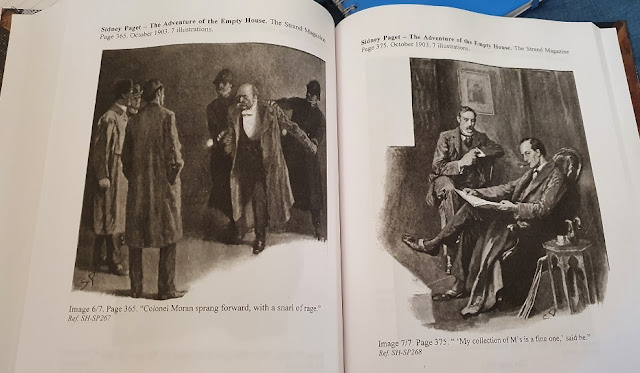 This book is in obvious competition with The Complete Paget Portfolio by Nick Utechin which I reviewed in late 2018. That tome scores over this one in some areas.
In Utechin's book you get to compare, in some cases, the illustrations from the magazines with the original artwork.
In Foy's book you get more artists than just Paget.
Utechin's book is a lot more portable.
My dilemma is the same as with Foy's last book. This is not an original concept but, in this sphere, so little is. If you have The Complete Paget Portfolio you may not want to fork out the £24.99 price tag for Foy's book ($34.95, €29.99.) If, like me, you're a completist, you probably will.
The later volumes, where Foy moves onto other artists, will be moving into territory where there is less competition. I look forward to their arrival.