I recently received the first issue of the new Sherlock Holmes Magazine...

When I learned of this new magazine via Facebook my first thought was that it was excellent news. My second thought was to wonder what on Earth would be featured in it. Needless to say, I was determined to obtain a copy and signed up for one immediately.

It turns out I needn't have worried. There was a lot to be found in the pages of issue one.
So what do you get for your £7 ?
The first thing to point out is that this magazine is not focused on any one area. It does not dwell on any adaptations, even though it predictably covers Sherlock. Nor does it dwell on more academic articles about the stories. In fact, it covers all this and more.
For me highlights included an article on non-Doyle Holmes adventures published in Europe during Doyle's lifetime and an article about a semi-official ban on the Holmes stories in Switzerland. 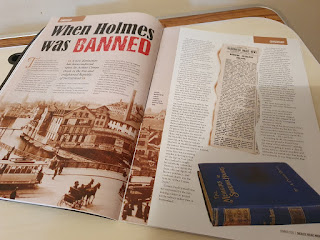 The range of articles is highlighted, on the one hand, by an interesting piece on the birth of forensic medicine in Edinburgh. On the other, a counterweight to this is an article pointing out the virtues of Nigel Bruce's portrayal of Watson opposite Basil Rathbone's Holmes.
Smaller pieces covered the release of a new Basil Rathbone biography and efforts to get a UK Holmes Con off the ground.
The range is such that I truly believe any Holmes fan coming from any perspective can get something out of this magazine.
Sherlock Holmes Magazine somewhat crept up on me and I am disappointed that I did not know about it sufficiently in advance to contribute to its debut issue. That said, I have high hopes for its future. If it can maintain the diversity of content shown in issue 1 then it surely has a bright future. I would fear for it if it began to drift too much into any one area. The best assurance against this is to secure a wide variety of contributors and not give way to the tribal warfare seen all too much on social media.
I salute the creators of this magazine. Of course it can be better and I think I, along with many other Holmes fans, would like to help you make it so.