Writing a biographical work on Arthur Conan Doyle has been a challenge ever since his death. However, the nature of the challenge has changed over the decades. In the beginning, the challenge was the inaccurate information in circulation (a good deal put there by Conan Doyle himself) combined with the Conan Doyle family's tight control of access to his papers.

Fast forward to now and the challenge mostly lies in how to navigate this already well-trodden path and present something new. I know how big a challenge this is both from the number of biographies I've read and also from the perspective of being one of Conan Doyle's biographers myself. 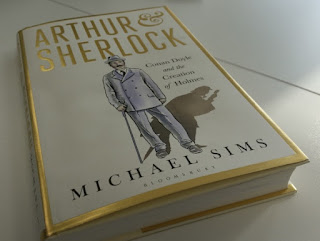 I therefore empathise with Sims and admire his approach which is to focus on Conan Doyle's journey from birth to the creation of Sherlock Holmes.

Is it an original approach? No, we cannot really say that. Given the fame of Holmes, the majority of Conan Doyle's biographers have taken an understandable interest in the aspects of his life that led to (and influenced) his most famous creation's birth and character. To an extent this is a commercial decision as Sherlock Holmes has always proved more interesting to the wider public than his creator. A strong Sherlock Holmes aspect to any biography on Conan Doyle will assist sales in much the same way that a biography without Holmes would almost certainly struggle.

Sims' writing invokes a sense of the time in which Conan Doyle was operating and is not, as suggested by some, dry (although it is a matter of taste). His tendency to jump back and forth in time can be a little jarring and you're not always immediately aware of when it has happened or by how much. That said, Conan Doyle's early life is covered well and is the part with which I am least familiar so I did pick up a few things that I did not know before.

Sims devotes large sections of his book to events that don't feature Conan Doyle at all. In each case the purpose of this is to demonstrate the literary and factual origins of the detective novel and the impact this had on Conan Doyle and his detective. In this area I also learned quite a lot. However, I do question whether some readers will have the patience to stick with large sections in which neither the factual nor fictional subjects feature.

As with pretty much all Conan Doyle bios, this contains errors (or apparent errors). Sims' handling of chronology can be confusing as already mentioned. Towards the end of the book he refers to Conan Doyle and his family settling into South Norwood in December 1891. This naturally implies that he was already famous for Sherlock Holmes before he arrived in South East London.

Now it is actually the case that Conan Doyle and his family moved to 12 Tennison Road, South Norwood on June 25th 1891 at the same moment the Holmes short stories launched in The Strand. Conan Doyle noted this in his own diary (which I have seen at the British Library). He also played a game of cricket for the local side five days later. So Sims is clearly amiss here (unless his definition of 'settled' is different to mine). The thing I find odd is that Conan Doyle himself was wrong about his arrival in South Norwood in his autobiography but even he did not suggest he moved to South Norwood in December 1891 (he stated August). So I do wonder where Sims got this from.

The ultimate opinion on this book has to come from two positions. Firstly, as a book in isolation and, secondly, as one amongst many in the Conan Doyle biography field.

In isolation, is the book a good one? To this I have to answer - yes. I find it well written and it gives a lot of good information. If you had no previous biographical works on Conan Doyle this would stand you in good stead but should not be your sole source.

So, if you want a biography on Conan Doyle and don't currently have one this is worth getting. If you have many and are a collector I think you will also want this book. If your situation falls between these two stools your decision is a harder one. I venture to suggest that even the most knowledgeable Doylean will get something new from this book - not necessarily facts but certainly opinions and angles.