Review - Adventures in The Strand by Mike Ashley

The British Library asked if I would read an advance copy of this book for review. Naturally I said yes.


I speak from experience when I say that embarking on a biographical work about Arthur Conan Doyle is a challenge. The principal challenge is how to make your book original. Every biographical work on Doyle will contain material that has appeared elsewhere. What makes new books stand out is how they present what we already know, what new items are presented and how the author interprets what they present.

Mike Ashley’s angle is to focus on Doyle’s relationship with The Strand Magazine. It’s not the first time it’s been done but it's the first that I've read. 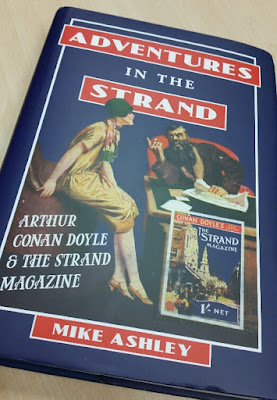 The book opens with a look at the early lives of Doyle, George Newnes (publisher) and Herbert Greenhough Smith (editor) in an attempt to illustrate how their lives came to overlap at The Strand. This is a particularly interesting aspect as it does not focus on Doyle and gives a lot of information about Newnes and Smith (especially the former).

The book moves on to look at the origins of The Strand itself and examines Doyle’s contributions across a range of areas. Fiction is covered with sections on Holmes, Brigadier Gerard, Professor Challenger and short stories such as the Round the Fire collection. Non-fiction is covered by items such as Doyle’s Boer and First World War output before turning to Doyle’s supernatural non-fiction output regarding the Cottingley Fairies and Spiritualism.

I found nuggets of new information throughout the book. Of particular interest to me was the trouble Doyle’s licencing caused the editor of the American edition of The Strand. A significant example of this being the return of Sherlock Holmes where the UK rights were with The Strand but the US rights were with Collier’s magazine. The pressure this put on the poor editor of the US Strand to find items to fill the gaps in his edition was something I had never considered before.

Despite its title the book does not entirely focus on The Strand magazine. Doyle’s contributions to other magazines are covered (although not to the same depth). I had no idea that Herbert Greenhough Smith had actually rejected (directly and indirectly) offerings from Doyle (for a variety of reasons) which then found their way into the pages of The Strand’s competitors.

The main body of the book (excluding  appendices) is some 260 pages which means that it is simply not possible for the book to be comprehensive in all areas. Ashley makes good choices about when to skim and when to go deeper and, refreshingly, his deeper moments are not all focused on Holmes (which you might have normally have expected).

How much you will learn about Doyle’s life from this book will largely depend on how many other biographical works you've read. Speaking as someone who has read a lot I can say that this book does provide a lot of lesser known detail and gives a wonderful insight into the relationship between Doyle and The Strand’s principals – arguably the second most important relationship in his life after his family.