I noted with some interest a letter (written by Peter Calamai) in the back of the current Baker Street Journal in regards to the notion that members of the public wore black armbands in their mourning for Sherlock Holmes in 1893. 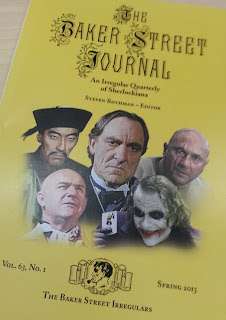 As the letter states, this tale is often told and the scale of this sartorial fad varies from account to account. However, as pointed out in said letter, there isn't any contemporary evidence for the armband story and you can be relatively assured that had it occurred on any scale – no matter how modest - it would have made the press in the and beyond.

In fact, in many areas of the press, there was very little reaction and some regional newspapers even seemed rather relieved. One newspaper suggested that its readers would have “mixed feelings” about the end of Holmes. It is quite a leap from "mixed feelings" to scores of black armbands and stories of old ladies hitting Conan Doyle with their umbrellas.

It is fair to say that the public reaction to Holmes’s return was much more pronounced than that to his Swiss plunge.