It's always a pleasure to review a Sherlock Holmes story by Bonnie MacBird as she is one of the few writers to genuinely make a good job of emulating the master.

As I often state, I am hard on pastiche as so much of it is poor or written by people who have no intention of offering a Holmes and Watson in keeping with the original template. Once again, I am happy to say that I had an experience far from that with this title.  Straight off the bat we have conflict. A mysterious box arrives for Watson which he cannot open and Holmes warns him not to touch. This triggers an argument that causes Watson to storm out of Baker Street. He returns to find Holmes in a straight-jacket. This made me feel right at home as it is totally in keeping with the Holmes who fires bullets into his own wall or conducts chemical experiments on the living room table.
In a very short space of time the duo have two further mysteries on their plates. A magician under possible threat from a rival and a young woman missing in Cambridge. Both ultimately prove to be a source of frustration for Holmes and Watson.
As with MacBird's previous novel, this is set early in the partnership and before her last novel The Devil's Due. Holmes and Watson are not yet at ease with each other and the police are still not comfortable with Holmes being on their patch. This makes for a degree of  both tension and conflict. 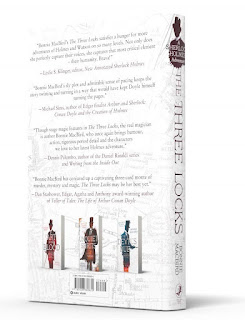 The novel gives us new characters of whom some are sinister and others repellant. Amongst these (but not necessarily in either of those categories) are two very formidable women. There is a risk, given the weaker position that women tended to occupy in Victorian times, that a strong woman, in a Victorian-set book written today, can feel more of our own time and hence anachronistic. Bonnie MacBird skillfully avoids this. The ladies in question feel very much of their time even if they are not necessarily representative of their sex in the era. The challenge they present to Holmes, or perhaps his view of women, reminded me at times of the dynamic between Holmes and Irene Adler or between Holmes and other strong women in the Canon such as Violet de Merville and Isadora Klein. One in particular made me think if Miss de Merville.
The story moves at a comfortable pace. It is never sedate nor is it too fast. We move seamlessly from London to Cambridge and back again and MacBird, during some of the early Cambridge scenes, tentatively dips her toe into the never-ending argument of where Holmes went to University.
As the story unfolds, clues are discovered, motives are exposed and the body count rises. I felt more and more excited to see how it was going to turn out - in a way that a book has not managed for me in quite some time (MacBird's other titles excepted.) On the way to the conclusion we have magic, escapology, young love and loss, antagonistic police, and scientific displays worthy of Nikola Tesla.
No words or time are wasted. Every word either sets the scene or advances the plot - no padding is to be found here. Chapters are of a comfortable length which makes this a perfect commuter book (although who is commuting these days).
The conclusion was satisfying, logical and fair. There were no last minute pieces of evidence or unnatural good luck leading to the solution - something that Conan Doyle's dislike of led to the creation of Holmes in the first place.
It is definitely the case that MacBird's series grows stronger with each book and she remains, in my opinion, the best and most faithful pastiche writer out there today - bar none.
Please note: I was sent a copy for review.